Argan oil or Argan:
Argan oil comes from the fruit of the Argan tree . This fruit, yellow green, like an olive but is both longer and about 3 inches round. The shell which encloses the nut is about a quarter of the total weight of the fruit. This nut can contain two to three "kernels" to be cold pressed to extract the famous and delicate Argan oil. This oil comes in two forms, food or cosmetic, depending on whether or not kernels were roasted.

The cooking oil is a precious oil for cooking. Darker than cosmetic oil because it has been roasted, it also has a stronger taste (taste of almond and hazelnut). It is a very nutritious oil, which is used to prepare, cook, flavor foods. It enhances the flavor of dishes: Amlou, couscous tagine, fish ... It is used for traditional Moroccan cuisine but also by great chefs in USA and Europe.

Argan oil cosmetic meanwhile, is odorless and much clearer than the other. It is used under the skin, hair, nails ... It would have virtues to treat skin problems such as eczema, acne, dry skin ... It is a great anti-aging and very popular. 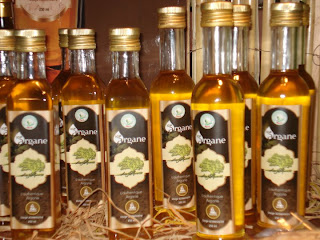 Origin of the Argan oil:
The Argan oil or Argan comes from the Argan Spinosa tree emblematic of Morocco. In fact, this tree grows only in this region of the world, in a triangle between Agadir, Essaouira and Taroudant. We might find it, however, on the borders of Algeria. It is in this environment; the desert is all that favorable conditions for its development (dry land, mostly sunny weather ...).

The Argan tree is also called the " women trees" because they are women, grouped into cooperatives that manage production. This large thorny tree 8 to 10 m tall, with a trunk and gnarled bark snakeskin is very durable. It can live 150 to 200 years. Very much alive, because even when cut, grazed by goats , it does regrow again. Its creeping deep roots insure a good anchorage in the soil and a good water supply. Argan protected by shade herbs and plants.

Argan has many advantages. Its leaves, fruits are eaten by animals: goats, sheep and even camels. Argan wood is very good quality and is used for framing. It is also used as firewood ... The almond fruit contains an oil rich, about 50% body fat obtained after roasting a slight pressure. The oil is used in both cosmetics and food preparation. 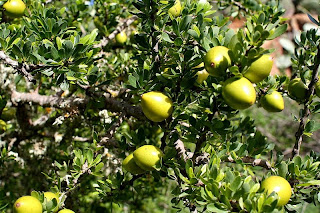 During the Tertiary, Argan spinosa or Argania received a warm and temperate climate, which allowed it to grow and spread over large areas from Morocco in the west to Algeria in the east. Subsequently, during the Quaternary glaciation, it moved to the southwest. This would explain its presence in the Rabat region, northern Morocco near the Mediterranean coast (Beni Snassen Mountains), and also northwest of Oujda. We also found a little near Tindouf in Algeria.

The Phoenicians were the first to use this very light oil in their lamps with oil. The Berbers of the Atlas have always used this Argan oil, one of the few resources at their disposal, for its virtues  for food and cosmetics. They even offer it as a sign of hospitality, Argan oil with honey which called Amlou.

While the largest predator of the Argan tree is the goat, it also plays an important role in the discovery and development of Argan oil. After ingestion of the fruit, it is eliminated in its droppings ( think of Bucket list movie about the most expensive coffee!!). Berber women recover the fruit, break its shells to recover ground almonds to get the famous oil.

Cultural aspects
The Argan tree is traditionally sacred and mythical. For the population, especially for the Berbers, it is considered "the father of all," a gift from God, they revere. Argan oil is for them a true "green gold" which has many medicinal properties. It is admired and honored but it can also be sometimes a source of conflict of uses. According to the communities, it is also part of annual or seasonal rituals (the horoms).

The exploitation of the Argan tree was governed by precise rules, rules stored in Agadir Community "fortified granary collective" in tachelhit. In time of war (between villages or clans), the Berber granaries used to defend themselves and protect the food supply (barley, almonds, Argan nuts ..). Codes have also been established by custom and sometimes written on boards, such as "louhs" in Berber. In addition, there are penalties imposed on those who cut the tree unjustified and unauthorized.

For millennia, the Berber women have continued to use Argan oil for its cosmetic, food and also for treatment. They were able to use Argan oil to protect their skin and hair, sometimes extremely harsh climatic conditions, strong winds, sunshine ... From birth to adulthood, the Argan oil is ubiquitous as is tea: an art of living. Argan oil with honey is indeed offered to guests as a sign of welcome.
Posted by Unknown at 11:39 AM

If you want your ex-girlfriend or ex-boyfriend to come crawling back to you on their knees (no matter why you broke up) you got to watch this video
right away...

(VIDEO) Why your ex will NEVER come back...